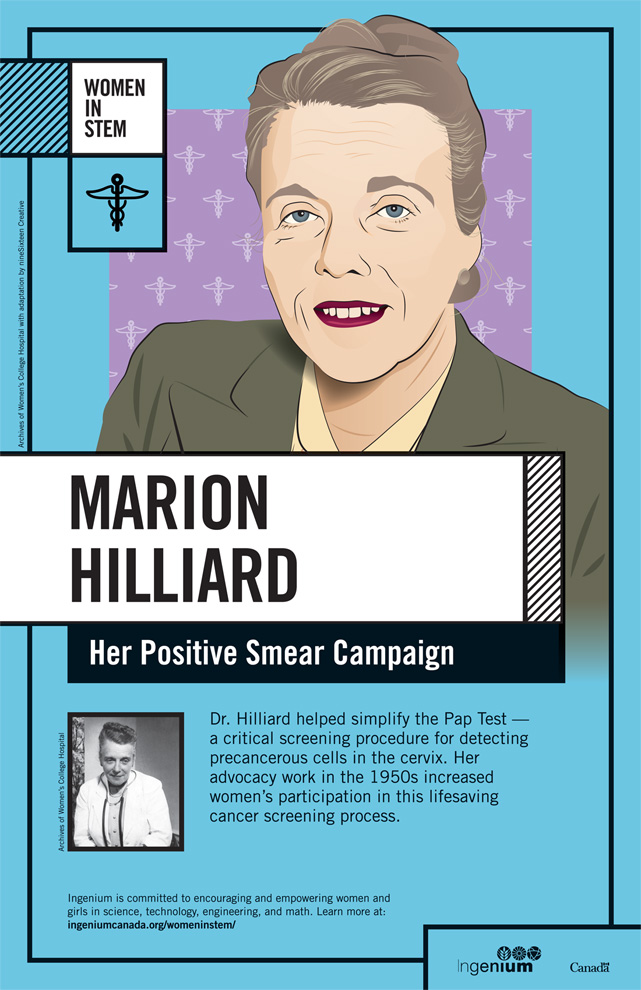 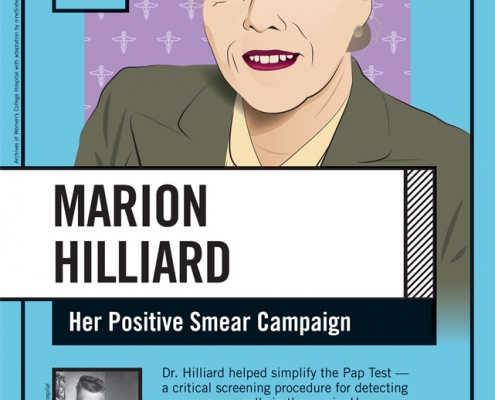 Dr. Hilliard helped simplify the Pap Test – a critical screening procedure for detecting precancerous cells in the cervix. Her advocacy work in the 1950s increased women’s participation in this lifesaving cancer screening process.

Dr. Marion Hilliard was born in Morrisburg, Ontario in 1902.

Initially, she wanted to be a concert pianist, but after failing her senior examinations, applied to university instead. Despite being pressured by her father to bend to traditional gender roles and become a teacher, she pursued science at the University of Toronto where she also became a star of the Varsity Girls’ Hockey Team.

After graduating in 1925, Dr. Hilliard went on to study medicine, determined to become an obstetrician after witnessing a live birth. In 1927, she graduated with a Bachelor of Medicine degree and journeyed to London, England to complete postgraduate training.

Dr. Hilliard returned to Canada the following year and joined the staff at the Women’s College Hospital (WCH) in Toronto. She also engaged in community work at schools and churches, becoming one of the first doctors to speak openly about sex education.

Throughout the Great Depression — a decade of poor health and living conditions — she pushed her limits by continuing to participate in outreach programs while working long hours at the hospital.

After taking a brief leave of absence for further study and travel, the immense workload started again with many of her colleagues enlisting to fight during the Second World War.

In 1947, she was appointed head of the department of obstetrics and gynecology at WCH.

That same year, Dr. Hilliard and her colleagues developed a simplified version of the Pap test to detect early symptoms of cervical cancer. In 1948, she introduced this test to the newly-established Cancer Detection Clinic, the first clinic of its kind in Canada.

In the 1950s, Dr. Hilliard focused a lot of her energy on helping women advance in the medical field, by giving referrals to help younger obstetricians establish their own practices, and by succeeding in getting WCH accepted as a University of Toronto teaching hospital. She also served as president of the Federation of Medical Women of Canada.

Dr. Hilliard retired at the age of 55 and made plans to travel and lecture, but in 1958, just one year after her retirement, she died from an obscure cancerous growth. She was buried in her childhood village of Morrisburg.

Back to all stories