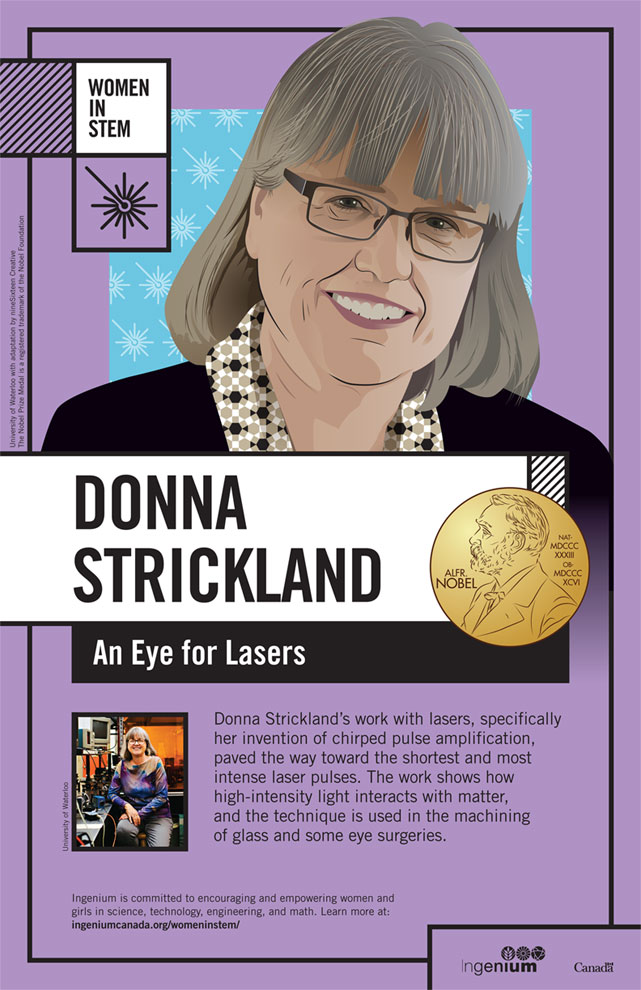 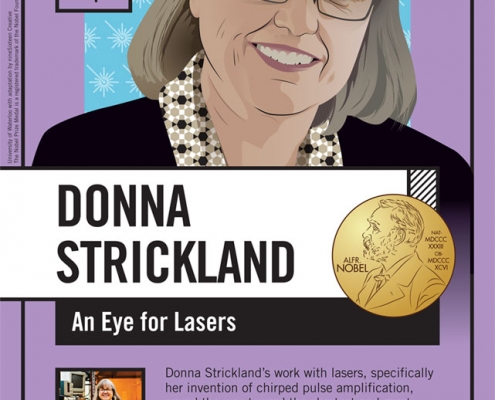 An Eye for Lasers

Donna Strickland’s work with lasers, specifically her invention of chirped pulse amplification, paved the way toward the shortest and most intense laser pulses. The work shows how high-intensity light interacts with matter, and the technique is used in the machining of glass and some eye surgeries.

Donna Strickland was born in Guelph, Ontario in 1959 to an electrical engineer and a high school English teacher. At school, she quickly viewed science as one of her strengths. With an interest in lasers and electro-optics, she stayed in Canada to study engineering physics at McMaster University, but moved to the United States to complete a PhD from the University of Rochester.

In 1985, Strickland and her PhD supervisor, Gérard Mourou, developed chirped pulse amplification — a way to increase the intensity of a laser without ripping it apart. This would end up leading to the most intense laser pulses ever recorded. Four years later, Strickland obtained her PhD in Optics.

Before settling down at the University of Waterloo in 1997 as a professor in the Department of Physics and Astronomy, she was a research associate at the National Research Council of Canada, a physicist with the Lawrence Livermore National Laboratory, and a member of the technical staff of Princeton’s Advanced Technology Center for Photonics and Opto-electronic Materials.

Her research at the University of Waterloo — where she remains today — deals with developing high-intensity laser systems for nonlinear optics investigations. She is also credited with more than 90 publications.

In 2018, Strickland and Mourou were awarded the Nobel Prize in Physics. Although the applications of their research wasn’t clear at the time of development, chirped pulse amplification has numerous wide-ranging uses, including corrective eye surgery and creating small glass parts for cell phones.

Strickland is the first Canadian woman and the third woman in history to receive this prestigious award, an honour she happily shares with women everywhere. While she is aware of gender inequity in STEM, she has admitted to being surprised that her gender was the biggest takeaway of the ceremony as she views herself as a scientist rather than a woman in science.

Strickland is also the recipient of an Alfred P. Sloan Research Fellowship (1998), a Premier’s Research Excellence Award (1999), and a Cottrell Scholar Award (2000).

Donna Strickland’s research on lasers was partially funded by NSERC.

Want to learn about how recognition, or a lack thereof, can affect women in STEM? Use Donna Strickland’s poster and this resource guide to explore further.