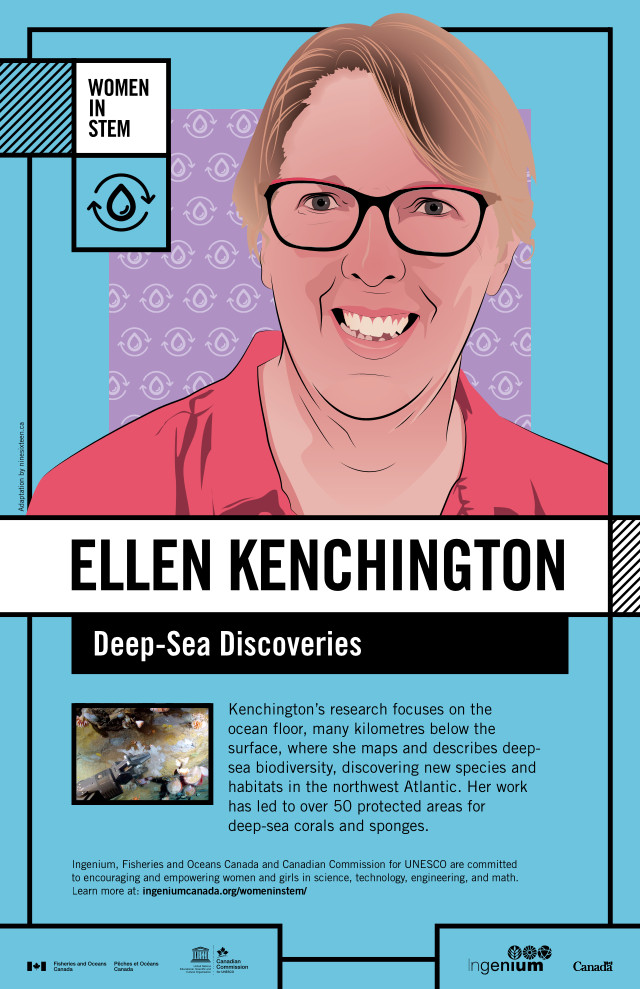 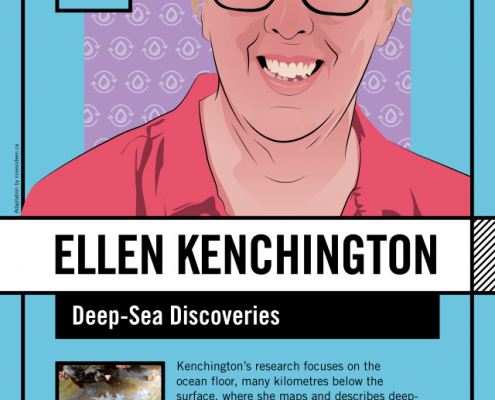 Kenchington’s research focuses on the ocean floor, many kilometres below the surface, where she maps and  describes deep-sea biodiversity, discovering new species and habitats in the northwest Atlantic. Her work has led to over 50 protected areas for deep-sea corals and sponges.

In a career spanning over 3 decades as a federal government scientist with Fisheries and Oceans Canada, Ellen Kenchington is a national and international authority on marine biodiversity and the impacts of fishing. She represents Canada in numerous related expert panels and committees, where her knowledge of deep-sea ecosystems has contributed to the scientific advice underpinning conservation efforts. Born in Windsor, Ontario her love of the ocean took her to the east coast where she attended the University of King’s College in Halifax, and received her BSc Hons and MSc degrees from Dalhousie University.  She then travelled to Australia where she obtained her PhD from the University of Tasmania. The research for her theses focused on seaweeds, winning her an award from the Phycological Society of America for outstanding pre-doctoral research. After graduating, she returned to Nova Scotia as an NSERC post-doctoral fellow where she studied the molecular biology of marine plants at the National Research Council lab in Halifax. Shortly thereafter she became a research scientist for Fisheries and Oceans Canada, maintaining her links with Dalhousie for over two decades as an Adjunct Professor lecturing in marine botany, and as the Cox Chair in Fisheries Science.

She is most passionate about her work in delineating deep-sea habitat, such as deep-water coral and sponge grounds, which has been an essential part of the successful international process to identify vulnerable marine ecosystems in response to United Nations resolutions, and provides support for the Policy for Managing the Impact of Fishing on Sensitive Benthic Areas, which manages deep-sea fishing in Canada. Her research has led to the protection of more than 50 areas in eastern Canada and the adjacent high seas from bottom-contact fishing, including sponge grounds, coral gardens, and seamounts. Recently, colleagues in Norway and Dalhousie University honoured her by naming a new species of deep-sea sponge, discovered on one of her research missions, after her, Cladorhiza kenchingtonae. Anticipating the need to document deep-sea habitats in Canada’s eastern Arctic before they are impacted by climate change, her work has taken her to Canada’s Arctic, where she has been working to support the Arctic Council’s Circumpolar Biodiversity Monitoring Plan by establishing deep-sea biodiversity monitoring sites. She continues to undertake ground-breaking research on deep-sea habitats studying climate-change impacts and using passive acoustic recorders placed on the sea floor to learn how fish use those habitats by the sounds they make.