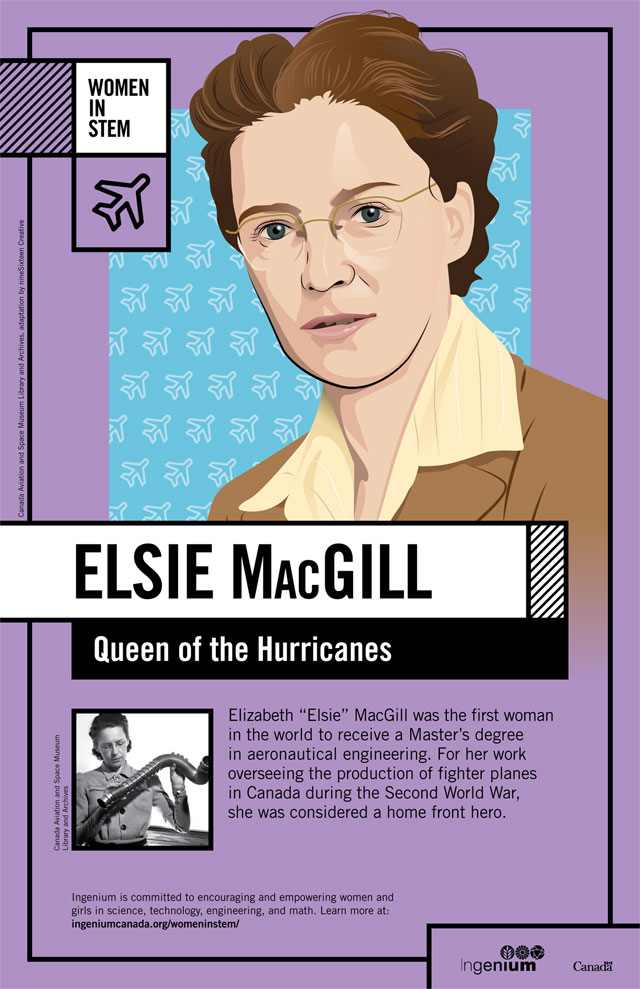 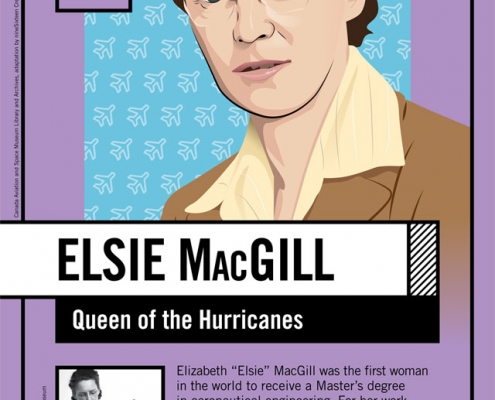 Queen of the Hurricanes

Elizabeth “Elsie” MacGill was the first woman in the world to receive a Master’s degree in aeronautical engineering. For her work overseeing the production of fighter planes in Canada during the Second World War, she was considered a home front hero.

Elizabeth “Elsie” MacGill was a Canadian aeronautical engineer who lived from 1905 to 1980.  She accomplished much in her life, even being considered a home front hero, but her path to greatness was not easy as she overcame many obstacles along the way.

Born in Vancouver, Elsie displayed an interest in fixing things from an early age.  Upon entering university, she pursued a degree in engineering, which was almost unheard of for a woman at that time.  Undaunted, Elsie forged ahead and in 1927 she graduated from the University of Toronto with an undergraduate degree in electrical engineering, the first woman to do so in Canada.  Afterwards, she headed to the University of Michigan to pursue a Master’s degree in aeronautical engineering.   She successfully completed the degree in 1929, the first woman in the world to do so, but this success was not without its difficulties.  Near the end of her degree, Elsie was diagnosed with polio and was told that she would never walk again.  Not willing to accept this prognosis, she went through three years of intensive physical therapy, eventually regaining the ability to walk with a cane.

After a series of jobs, Elsie became the chief aeronautical engineer for the Thunder Bay-based company, CanCar.  There she became the first woman to design an airplane, the Maple Leaf II.  The plane was never built as the Second World War began and the priorities of the company shifted.  Cancar won a contract to build the Hawker Hurricane, one of the main fighter planes used by the Allies.  The difficulty was that Cancar primarily manufactured railroad cars and buses. Elsie successfully converted the factory’s production lines to produce airplanes. At CanCar, Elsie supervised the engineering staff, designed the tooling to create an airplane assembly line, and procured American parts as substitutes for the British parts that could no longer be shipped. These efforts helped make Cancar into an efficient producer of airplanes; by the end of the war, it was estimated that Cancar produced over 1400 Hurricanes, and designed the first winterized version of the aircraft, which included skis. She received a great deal of media attention, because it was rare for a woman to be an engineer in a position of leadership, particularly at that time.

After the war Elsie worked as a consultant in the aeronautical industry.  She also became more active in supporting the rights of women.  While she felt that being a woman was never a major hindrance for her, she was becoming more aware of the difficulties that others were experiencing.  As a result, she started participating in initiatives such as the Royal Commission on the Status of Women.  Near the end of her life she wrote “I have received many engineering awards, but I hope I will also be remembered as an advocate for the rights of women and children.”