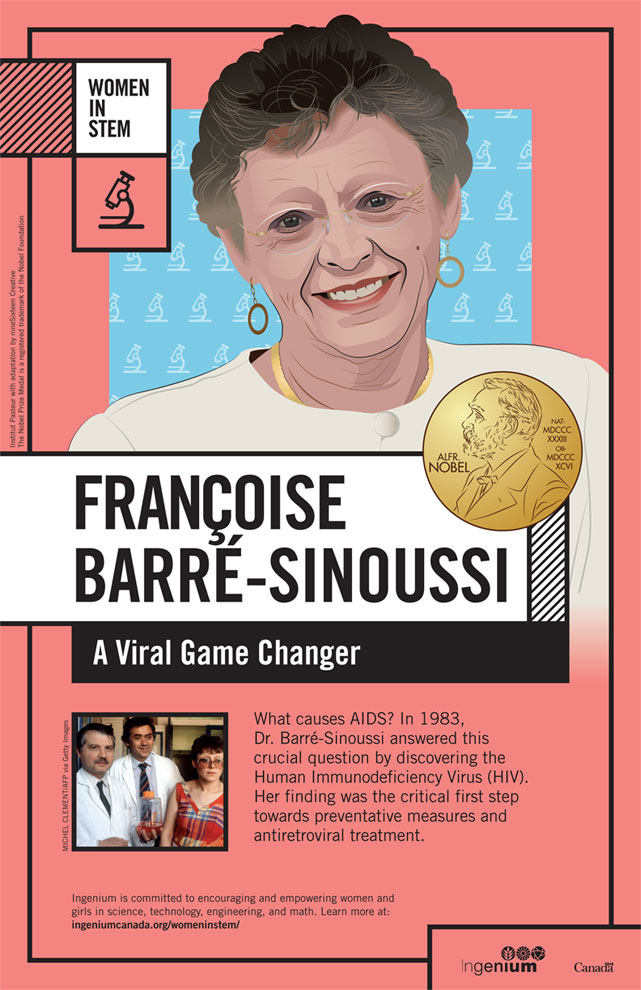 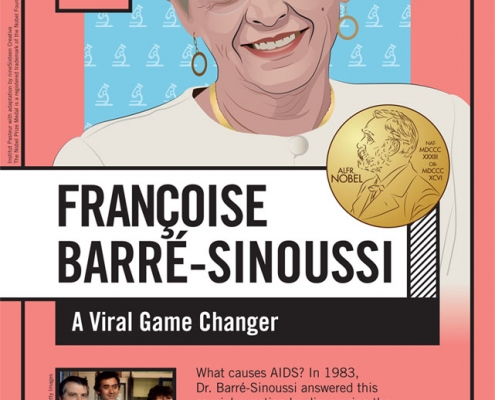 What causes AIDS? In 1983, Dr. Barré-Sinoussi answered this crucial question by discovering the Human Immunodeficiency Virus (HIV).  Her finding was the critical first step towards preventative measures and antiretroviral treatment.

Françoise Barré-Sinoussi was born in Paris, France in 1947 and spent much of her childhood exploring the outdoors and observing nature.

She chose a degree in Life Science rather than Medicine, because she didn’t want to burden her family with tremendous school expenses. After graduating, she spent months looking for volunteer work as a student before landing a spot with the Pasteur Institute. Despite spending more time in the lab than in class, Barré-Sinoussi earned a PhD from the University of Paris in 1974.

She pursued a post-doctoral research fellowship at the National Institutes of Health in the United States, where she remained for a year before returning to the Pasteur Institute to study the natural control of retrovirus infections in host cells.

Collaborating with a team of other medical professionals, Barré-Sinoussi began investigating the cause of a new epidemic that was quickly spreading throughout LGBT communities. In 1983, she co-discovered the lymphadenopathy associated virus — later renamed the human immunodeficiency virus, or HIV.

Further studies began immediately; the first reports were published in May of the same year. Barré-Sinoussi was invited to present the findings herself, and the scientific world accepted HIV as the etiological agent of AIDS relatively quickly.

In 1992, Barré-Sinoussi was appointed as head of the Biology Retroviruses Unit at the Pasteur Institute. She dedicated her career to HIV research and activism, developing successful international connections and partnerships.

Barré-Sinoussi won the Nobel Prize in Physiology or Medicine in 2008. Because of France’s mandatory retirement laws, she hung up her lab coat in August 2015, but remains involved through various committees and councils.

While there is currently no vaccine or cure for HIV, Barré-Sinoussi acknowledges that failure is merely an opportunity to learn. Her research has pushed the field of vaccinology forward and continues to influence those pursuing medicine.

Want to learn how gender discrimination can impact women in STEM? Use Françoise Barré-Sunoussi’s poster and this resource guide to explore further.