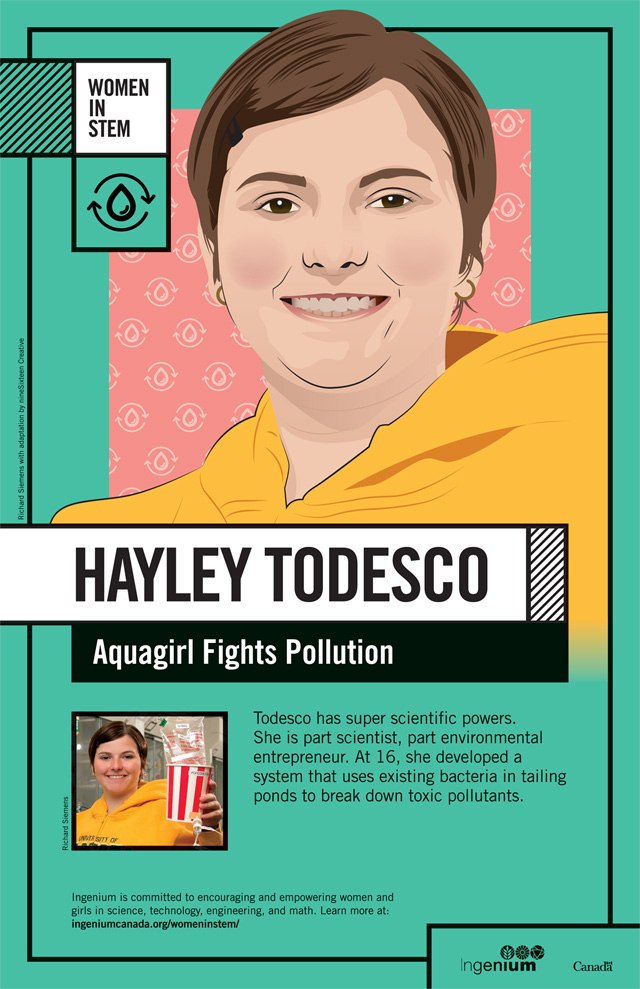 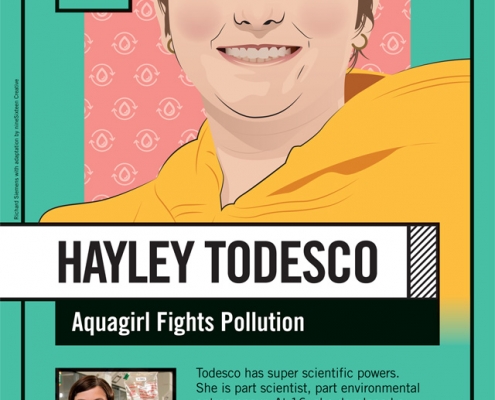 Todesco has super scientific powers. She is part scientist, part environmental entrepreneur. At 16, she developed a system that uses existing bacteria in tailing ponds to break down toxic pollutants.

Hayley Todesco was born and raised in Calgary, Alberta, and was aware of the harmful effects of pollution from a young age. However, it wasn’t until the age of 10 — when she watched Al Gore’s An Inconvenient Truth — that she grew determined to solve local environmental issues. From then on, she participated in as many science fairs as possible, hopeful that she’d discover an innovative way to deal with these problems.

At the age of 16, she turned her attention to the oilsands tailings ponds — engineered dams to store the leftover by-products from mining and extracting resources. This waste ultimately contributes to the rising level of toxins in local rivers and affects the surrounding wildlife.

Working out of a lab at the University of Calgary, it took two years of trial and error before Todesco developed a filtering system that uses sand, and the existing bacteria in the water, to detoxify the oilsands tailings. This procedure is 14 times faster at breaking down pollutants than other current human-made designs, and could decrease the detoxification time of tailings ponds from centuries to decades.

A guest speaker at numerous national and international science fairs, youth conferences, and industry events, Todesco dedicates a lot of her time to spreading awareness of environmental concerns. She is a champion of perseverance, and hopes to inspire more youth into taking action against the spread of pollution. Through her work, she has also developed a passion for encouraging young girls to pursue STEM-based opportunities, whether it be science fairs or other extracurricular activities.

In 2014, she won a $25,000 scholarship from Google for her oilsands research. In September of the same year, she received the Stockholm Junior Water Prize and the accompanying $15,000. She was also the recipient of Canada’s Top 20 Under 20 award in 2015.

Following her early success, Todesco went on to study molecular genetics at the University of Alberta. She continues to seek new ways to improve her detoxification filters, and is eager to work towards solutions to other environmental issues.

Want to learn how social expectations can impact girls and young women wanting to pursue a career in the STEM fields? Use Hayley Todesco’s poster and this resource guide to explore further.