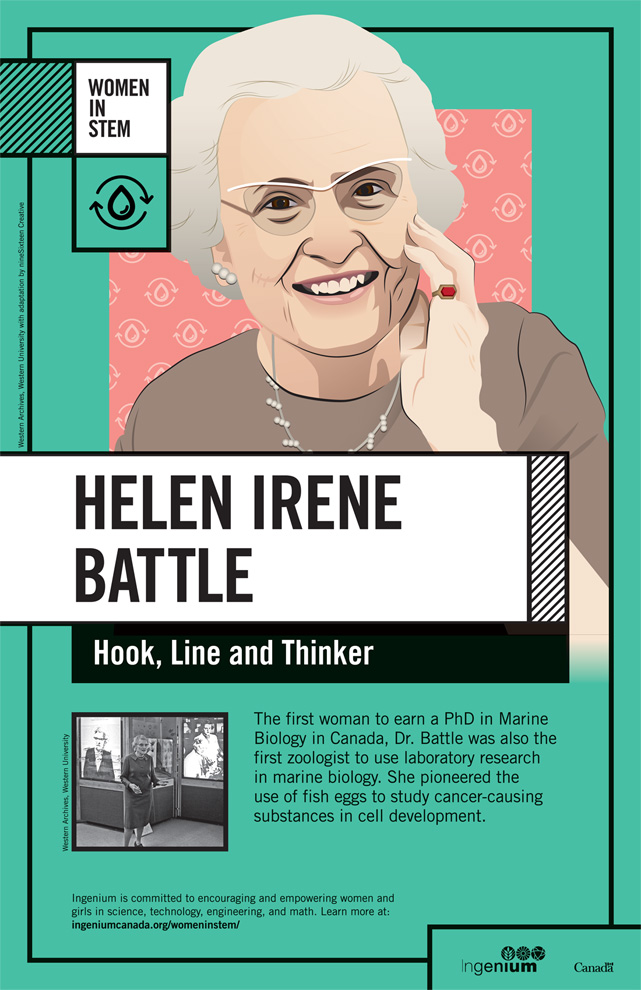 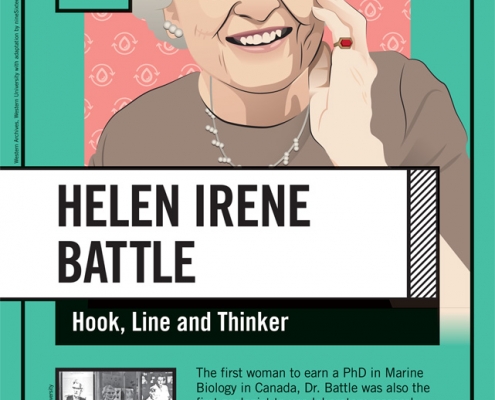 The first woman to earn a PhD in Marine Biology in Canada, Dr. Battle was also the first zoologist to use laboratory research in marine biology. She pioneered the use of fish eggs to study cancer-causing substances in cell development.

Dr. Helen Irene Battle was born in London, Ontario in 1903 and was only 16 years old when she began her undergraduate studies at the Western University of London, Ontario. Following her graduation in 1923, she remained at the same school — since renamed the University of Western Ontario — to begin her Master’s degree with the Department of Zoology. It was there that Dr. Battle discovered her lifelong interest in the study of fish embryology.

After graduating, she left London to study at the University of Toronto and in 1928, she became the first Canadian woman to earn a PhD in Marine Ecology.

Dr. Battle soon returned to her alma mater to begin her 50 year-long career as a professor. She was a gifted teacher with a passion for passing on knowledge to her students, many of whom became influential biologists themselves.

While teaching, Dr. Battle continued her own research, actively applying laboratory research methods to solve problems in marine biology — the first zoologist to do so. She also used fertilized fish eggs to study the effects of carcinogenic substances on cell development. Throughout her career, she published 37 journal articles, many of which are illustrated with her own drawings.

In 1961, she co-founded the Canadian Society of Zoologists and served as its president for the following two years.

In 1967, at the time of her retirement, the Department of Zoology established a scholarship in her name, but Dr. Battle was not done teaching. Innovative and resourceful, she became the first instructor to record a series of lectures for television.

Working in a field dominated by men, she was particularly active in campaigning to improve the status of women in universities and in encouraging her female students to pursue higher education in science, often writing them glowing references.

Want to learn about the challenges trailblazers face as women in STEM? Use Helen Irene Battle’s poster and this resource guide to explore further.