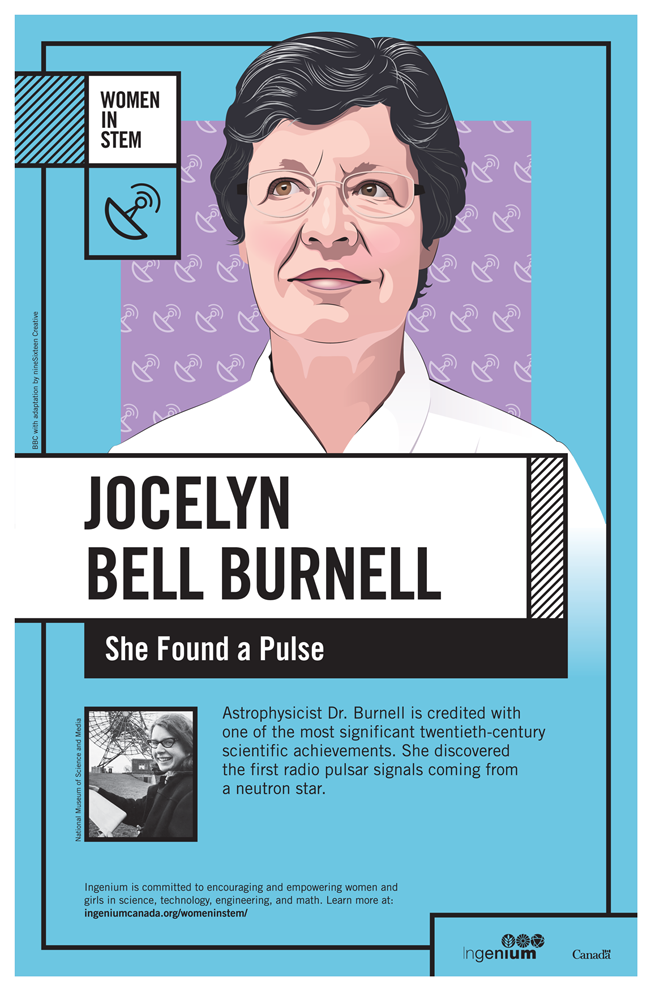 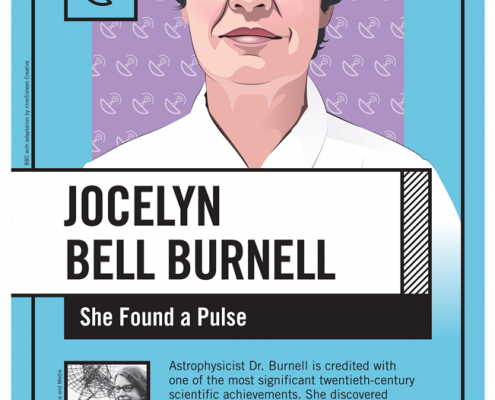 She Found a Pulse

Astrophysicist Dr. Burnell is credited with one of the most significant twentieth-century scientific achievements. She discovered the first radio pulsar signals coming from a neutron star.

Jocelyn Bell Burnell was born in Northern Ireland in 1943. As a young woman interested in pursuing science, she faced many obstacles, including the assumption that once she entered secondary school, she would take domestic studies rather than traditional science courses.

Bell Burnell continued her education at the University of Glasgow, where she received her Bachelor of Science in Physics in 1965. At the University of Cambridge — where she worked on completing a doctorate in radio astronomy — she continued to experience gender discrimination, mainly due to the expectation that once she got engaged, she would withdraw to become a housewife.

Despite these pressures, Bell Burnell is credited with the greatest astronomical discovery of the twentieth century. In 1967, she worked closely as a research student with her supervisor Antony Hewish at Cambridge. In order to detect distant quasars, Bell Burnell helped construct a large radio telescope which she personally operated for months before discovering a series of regular radio pulses.

With help from Hewish’s team, Bell Burnell continued to monitor them. After she found a further three of these objects, it was determined that these one-second-apart pulses were coming from dense, spinning neutron stars — or pulsars, as they were later called. This discovery provided the scientific community with ground-breaking opportunities, such as creating a precise cosmic clock, detecting gravitational waves, and testing fundamental theories in physics.

In 1974, Hewish and another researcher, Martin Ryle, were awarded the Nobel Prize in Physics. Bell Burnell acknowledged the role gender stereotypes played in her omission, but decided to ignore this controversy to focus instead on the pursuit of science and education.

Over the next several decades, she taught at various universities, was appointed dean of science at the University of Bath, worked at the Royal Observatory in Edinburgh, and served as president of the Royal Astronomical Society and the Institute of Physics.

Bell Burnell believes that STEM culture needs to change in order to encourage more girls to pursue science and come up with new ideas. She attributes her discovery of pulsars to the fact that she was a minority herself, which ultimately motivated her to work harder. To help others, she has donated the $3 million for winning the Special Breakthrough Prize in Fundamental Physics to the UK’s Institute of Physics, to support underrepresented graduate students with their studies.

In 2015, Bell Burnell won the Prudential Women of the Year Lifetime Achievement Award to celebrate and recognize her accomplishments.

Want to learn how gender roles affect women in STEM? Use Jocelyn Bell Burnell’s poster and this resource guide to explore further.