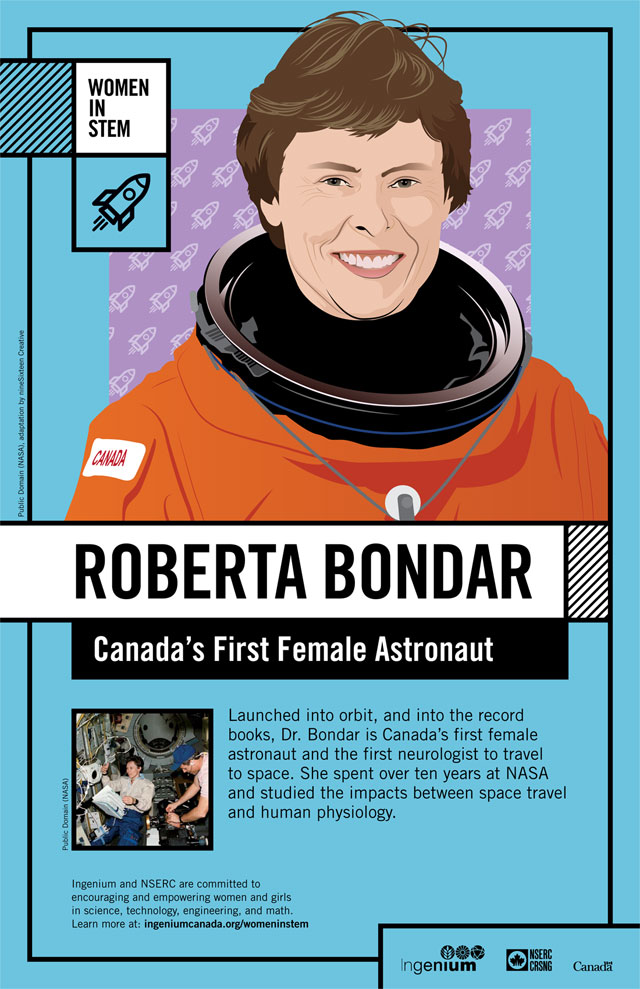 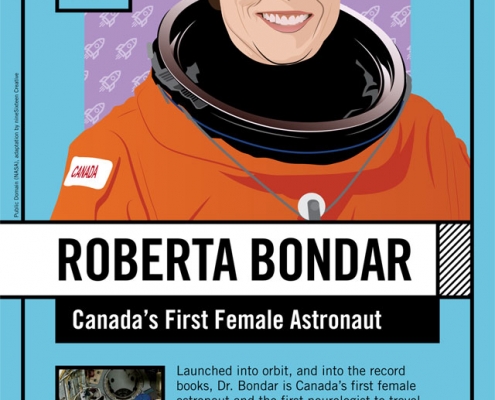 Launched into orbit, and into the record books, Dr. Bondar is Canada’s first female astronaut and the first neurologist to travel to space. She spent over ten years at NASA and studied the impacts between space travel and human physiology.

Born in Sault Ste. Marie, Ontario in 1945, Dr. Roberta Bondar was always interested in the world of science. Prior to becoming a fellow of the Royal College of Physicians and Surgeons of Canada in 1981, she obtained a PhD in Neuroscience in 1974 from the University of Toronto and a Doctor of Medicine degree in 1977 from McMaster University. She interned at the Toronto General Hospital in internal medicine before becoming an assistant professor of medicine, specifically in neurobiology, at McMaster University from 1982 to 1984.

In 1983, the Canadian Space Agency (CSA) put the Canadian Astronaut Program into operation with the task to select Canada’s first astronauts. After applying and going through interviews and training for six months, Dr. Bondar was selected to be a part of the 1992 first International Microgravity Laboratory Mission (IML-1). After several delays of the mission, Dr. Bondar finally went into space on January 22nd, 1992 aboard the Space Shuttle Discovery for eight days. This mission made her the first Canadian woman and the first neurologist to travel to space.

On board, she and the IML-1 members began working on experiments and taking photographs of the Earth. Overall, 40 experiments were conducted. In 1994, Dr. Bondar joined NASA and left the CSA to continue her research on the effects space travel has on the human body. She remained at NASA for over ten years.

When asked about some of the challenges she has had to face throughout her career due to her gender, Dr. Bondar stated that receiving the same opportunity and dignity as men was difficult to get. She continues to encourage girls to build a support system of both women and men. She not only wants men and boys to see women as equals, but as role models too.

Following her time at NASA, Dr. Bondar used her experience as a neurologist and as an astronaut to become a public speaker in Canada to share her story and knowledge. In 2003, she became the Chancellor of Trent University for six years before launching the Roberta Bondar Foundation in 2009, a charity organization dedicated to supporting environmental causes. Due to her love for nature and photography, she published four essay photograph books dedicated to showcasing Earth’s natural beauty.

Dr. Bondar has received many rewards throughout her career, such as the Order of Ontario, and the Order of Canada, is featured in the Canadian Medical Hall of Fame and has been given a star on the Canadian Walk of Fame. Alongside these awards, she has also been given 28 Honorary Degrees for her life experiences.

Roberta Bondar’s research on neuroscience was partially funded by NSERC.