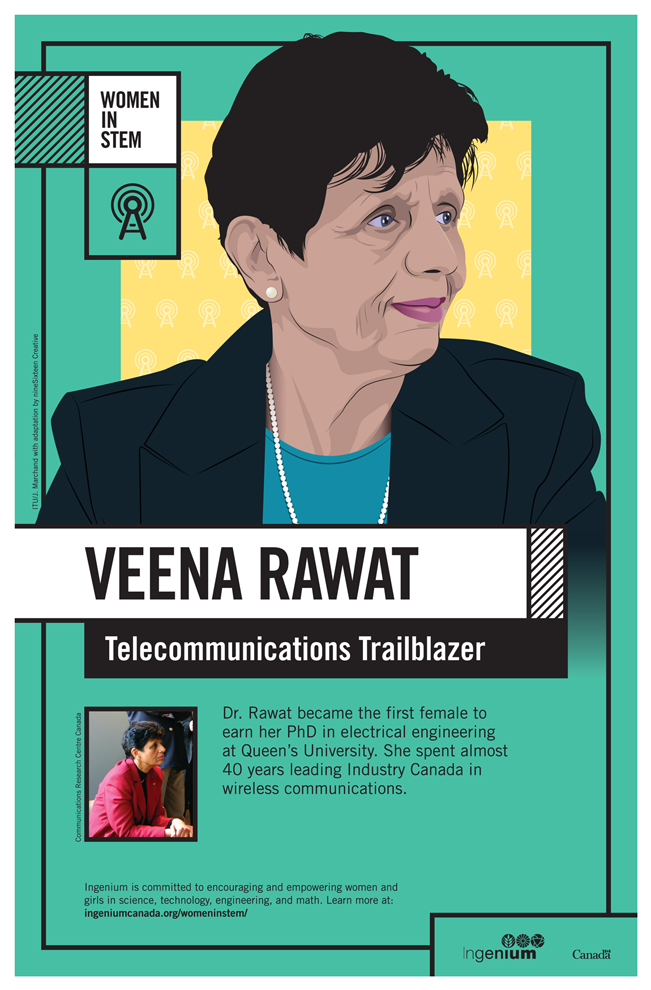 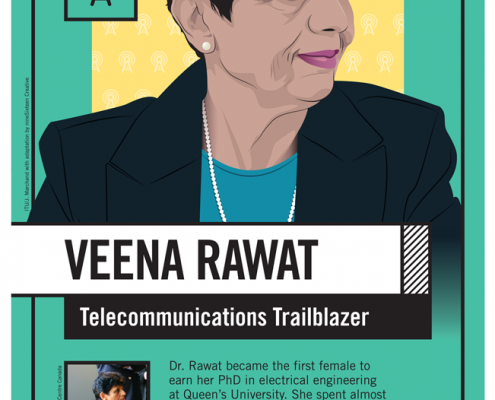 Dr. Rawat migrated to Canada in 1968, and worked as a lecturer at the University of Lethbridge, Alberta, for one academic year. In 1969, she pursued post-graduate education at Queen’s University in Kingston, Ontario for a PhD in Electrical Engineering. Her research focused on the transmission of radio signals underground; interestingly, as a woman, she wasn’t allowed to enter active mines and was forced to rely on the data collected by her male lab technician for her research work. Nonetheless, Dr. Rawat became the first woman ever to earn a PhD in Electrical Engineering from Queen’s University in 1973.

Upon completion of her PhD, she worked as an engineer at Computing Devices in Ottawa for a year before joining Industry Canada (formerly the Department of Communications) in 1974, where she garnered a reputation as a leading expert in telecommunication technologies and spectrum management. While she promoted Canadian innovation, she also spent a lot of her energy fostering strong international ties and research partnerships with other governments, organizations, and educational institutions, and encouraging young women to study science and engineering.

Dr. Rawat joined Industry Canada’s Communications Research Centre in 2003 as executive vice president. She became president the following year; she’s the first woman to hold this position. She was also the first woman and the first Canadian to chair the World Radiocommunication Conference of the UN’s International Telecommunication Union (ITU) in 2003. For her contributions in that capacity, she was awarded a Gold Medal.

Dr. Rawat has been the guest speaker at over 150 national and international conferences. In addition to her ITU Gold Medal, she is the recipient of numerous honours and awards, including Canadian Woman of the Year in Communications (2004), Canada’s Most Powerful Women Top 100, Canada’s Executive Women’s Network (2005), Excellence in Leadership in Government of Canada, and Wireless Communications Association International (2005).

In 2014, she was awarded Officer of the Order of Canada.

As a woman, Dr. Rawat advocates for more opportunities in science and technology for women. Through Industry Canada, she was involved in a university recruitment program for aspiring engineers that included possible public service employment. She continues to be involved in mentoring women and providing guidance for their career development.

Want to learn how intersectionality affects women in STEM? Use Veena Rawat’s poster and this resource guide to explore further.