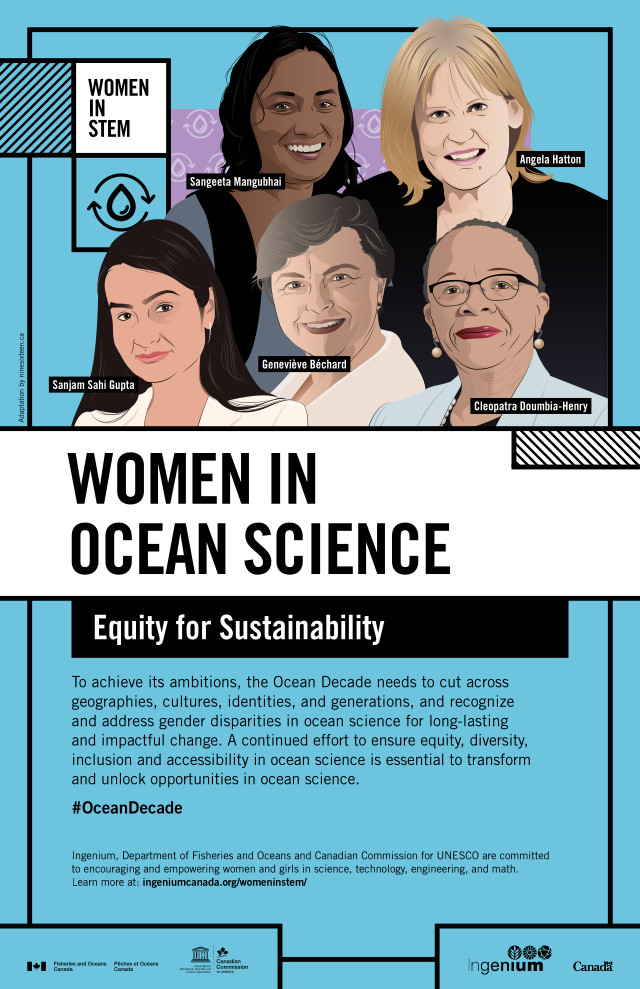 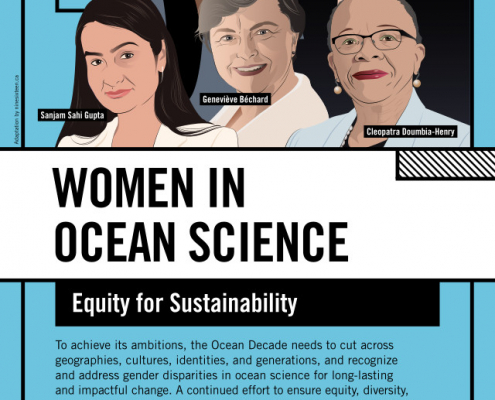 To achieve its ambitions, the Ocean Decade needs to cut across geographies, cultures, identities, and generations, and recognize and address gender disparities in ocean science for long-lasting and impactful change. A continued effort to ensure equity, diversity, inclusion and accessibility in ocean science is essential to transform and unlock opportunities in ocean science.

Ingenium, DFO and Canadian Commission for UNESCO are committed to encouraging and empowering women and girls in science, technology, engineering, and math.

The 5 women in this poster were featured in the Gender Equity in Ocean Science: Amplifying Voices, Increasing Impact report. You can read more about each of them below.

The report (Gender Equity in Ocean Science) examined factors that contribute to the underrepresentation of women in ocean science. The study reaffirmed that ocean science benefits from gender equity. However, it found that barriers, such as unconscious bias, a gendered workspace and unpaid labour, though not exclusive to ocean science, hinder the participation of women in the field. The report recommended accommodating unpaid care responsibilities, mentorship, outreach to marginalized communities and the inclusion of women in planning and policy as means to achieve this goal.

Trained as a microbiologist, Bechard spent twenty years in managing federal science programs before joining the Canadian Hydrographic Service (CHS). As head of the CHS, Bechard supports industries in ocean science with data such as charts and maps. Out of the 93 member countries of the International Hydrographic Organization, only 11 are headed by women. Bechard hopes to change that.

After two competitions for leadership positions at CHS where there were no qualified women candidates and few women applied, Bechard decided to launch an effort to make her workplace more equitable for women. She created a network of women to develop policies that could encourage women to feel more welcome in the workplace. These efforts include making the at-sea practices more gender neutral, such as addressing bathroom-less small vessels and bunking on larger vessels. She strives to create a culture to empower women with the skill sets they need so they can apply for leadership roles and be able to affect change.

Originally from the Caribbean nation of Dominica, Doumbia-Henry earned many international scholarships, leading to a career in labour law. In 2006, while working at the International Labour Organization, she helped develop the Maritime Labour Convention, which helps protect women seafarers.

As President of the World Maritime University (WMU) in Sweden, recognized by the United Nations as a global centre of excellence in maritime and ocean education, she has helped increase the amount of women students from 10% to 35%. Recognizing the importance of role models, she strives to work harder than everyone else so she can lead by example, and give back by sourcing donations to target women for fellowships, particularly those from developing countries.

She credits her success not only to her own hard work, but to people who have supported her throughout her career, particularly her father, who encouraged her to persevere knowing she would encounter obstacles.

Gupta’s work for her parents’ company, Sitara Shipping Limited, began in 2001. As a woman, she faced challenges being accepted in a leadership role. When she began working, she and her sister would often be the only women at board meetings. Her father’s colleagues would often patronize him for not having any sons to carry on his business – to which he would reply that his two daughters were the equivalent of eleven sons.

To promote diversity in the shipping industry, she initiated the creation of a handbook that illustrates body language and behaviour that are acceptable on board ships with women seafarers. She also led a survey of women seafarers and companies to find out how to increase women’s participation in leadership roles. The survey found that many women didn’t feel they had the proper training for leadership positions. To address this, she designed a leadership accelerator program that includes lectures, case studies, field projects and exercises to provide women with the skills they need.

Hatton is a microbial biogeochemical oceanographer who studies microscopic ocean life and their impact on the cycling of nutrients in the water. More recently, she was the Chair of the Science Committee for the Natural Environment Research Council (NERC), the United Kingdom’s largest environmental science funding agency, and as of 2021, is the Director of Science and Technology at the National Oceanography Centre.

Through her leadership roles in numerous committees, she has sought to promote a more inclusive work environment. She advocated for her colleagues to ask women to apply for jobs, even if they don’t feel they meet all the qualifications. This stems from the statistic that women tended to only apply for jobs when they met 100% of the qualifications, whereas men would apply if they felt they met 60% of them. When this was implemented at NERC, they immediately received more women applicants than men for their science committees. She also encourages inclusivity by holding important meetings during core work hours and lunchtime events for important visitors to provide more opportunity for accessibility.

Recognizing the strength in collaborating with other women who are committed to helping each other, she organized Conservation Diva Nights at international symposiums, where women leaders in coral reef conservation can network and celebrate the contributions women have make to science and conservation. By emphasizing the importance of gender issues whenever she can, for both her workplace and her research, such as collecting sex-disaggregated data to analyze it through a gender lens.